↓ Skip to Main Content
Home › Uncategorized › The Guardian – Firefighters are by your side through fire and flood. Our thanks? The threat of being sacked

The Guardian – Firefighters are by your side through fire and flood. Our thanks? The threat of being sacked

When you’re a firefighter standing in front of a burning house, you want to go in and rescue whoever is inside, regardless of whether or not you have enough support crew.

The advice from the bosses is not to put ourselves in harm’s way, to wait for that second fire engine to turn up. But when you dial 999, we get there as fast as we can. We are straight into the burning house, or by your side in a car crash, or there to rescue you from dangerous floods. Sometimes we just have to hope that the extra support will turn up as soon as possible.

If you dial 999, firefighters respond. Now we need you to help save us too

The day I was given the honour of joining Greater Manchester Fire and Rescue Service, I was over the moon. My father had been a firefighter before me, and I knew I was joining a group of people willing to give their lives for others. So we were all shocked in September when the Greater Manchester Fire and Rescue Service announced plans to sack its entire, 1,250-strong workforce and only re-employ those who agreed to new, 12-hour shifts.

With the help of the public and the Fire Brigades Union,we fought back and thankfully the authority announced last week that it would be withdrawing those plans – for the moment anyway. But we don’t know what the new plans will be, and we’re still worried about the future of the fire service and our ability to keep you safe.

Greater Manchester’s fire service has already had to make £28m in cuts. Over the past six years, the service has taken a massive hit and the government is imposing a further £14.4m over the next four years. Despite a high number of firefighters retiring, a sustained recruitment freeze has meant the number of firefighters is at an all-time low, and so is the number of fire engines available. We have lost 400 posts since 2010, at a time when fire deaths have tripled in Greater Manchester in the past 12 months. 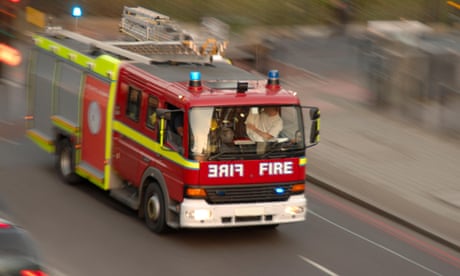 We now have only four firefighters on each truck, when the national standard is five. Normally two trucks will be sent to an emergency call-out but now we only have staff for one truck and have to wait for a neighbouring area to send a support crew. At a house fire, we need two firefighters to go inside, one to operate the pump and an officer in charge, to keep operational oversight. That means that if anyone is brought out of the house, there’s no one to look after them before the ambulance service arrives. That can be a while – they’re just as stretched as we are.

There is a growing crisis of mental health issues affecting those in the fire and rescue service across the country. I have seen things that no person should have to see and lost friends through the worst kind of circumstances due to the pressures of the job. We have had six firefighter suicides in my brigade in four years. Our managers, local authorities and national government should be trying to help us instead of forcing us into a corner.

On shift in flooded Cumbria, I lived the reality of fire service cuts

We all understand the requirement imposed on the brigade to save money, but we need to talk about these matters in an adult, professional way and negotiate an agreed settlement, instead of threatening to sack every firefighter in Greater Manchester.

We all love what we do, we understand the risks of the job, and we understand what is expected of us by the public. But if we lose yet more firefighters and have our resources cut even more, I worry we won’t be able to work effectively to keep you safe.

This series aims to give a voice to the staff behind the public services that are hit by mounting cuts and rising demand, and so often denigrated by the press, politicians and public. If you would like to write an article for the series, contact kirstie.brewer@theguardian.com

Talk to us on Twitter via @Guardianpublic and sign up for your free weekly Guardian Public Leaders newsletter with news and analysis sent direct to you every Thursday.